Too Clever For Their Own Good?

Everyone wants that next blockbuster idea that cuts through and gets the clicks and reactions on social media.

Almost every day I see a post on Linkedin highlighting some ‘genius’ piece of advertising or marketing.

There’s the KFC ‘FCK’ response when they ran out of chicken, the BA ad at Picaddily Circus with the kid looking up at the plane in the sky and Greggs reversing the logo at one of their outlets so it appeared the right way up for anyone looking in the window display at the department store across the street. At night.

None of the above fit my definition of ‘genius’ advertising, marketing or public relations.

Award winning, sure. Clever, maybe and creative, most certainly. But we should strive for more than that.

Each of the examples above carries with them metrics. So the companies, or often agencies involved will quote statistics about social media shares, footfall to the stores increasing, an upturn in bookings etc, but they need to provide that sort of evidence in order to win the awards they’re going after and I’d suggest some of the results could have been achieved a multitude of different ways or could have been expected at the time of year etc.

Let’s start with BA. So they took an ad at Piccadilly Circus and it was timed to run at the precise moment a particular flight could be seen across the sky from that location, using sensors from the transponders and other data points. The kid in the ad looks up at the sky, points and says, ‘Oh look, it’s BA flight 1496 to Glasgow’, or whatever it was.

That’s a really clever idea and requires a vast array of systems and data all working together to get the right result. If I stood there watching for long enough I’d get a sense of the variety of destinations BA flies to, which might influence my future holiday plans.

But it does nothing to improve BA. It doesn’t help with the customer service experience. Doesn’t make their website any easier to use. Doesn’t cut queues, combat delays or make their flights more affordable. It doesn’t make me want BA or like BA. It tells me they’re clever, tells me where they go and that’s about it. It raises my expectations – tells me BA can do amazing things with real-time information. Except they can’t. Not when planes are disrupted because of a drone at Gatwick, not when ‘The Beast From The East’ freezes the runway and not when staff go on strike or check-in systems fail.

What it really does, of course, is tell me what’s possible with modern digital advertising at Piccadilly Circus. It’s a great ad for the owners of the video screen and a great ad for the agency behind the idea. But for BA in the long term? Almost meaningless.

Now KFC. This is a business that operates a franchise model. So as a franchisee I’m counting on them to keep me going with chicken. And famously, last year, due to a delivery cock up, many of their outlets ran out and couldn’t serve customers. Once they’d sorted things out, this was the response. Again, clever and funny and outstanding reach. So everyone knows KFC has a sense of humour. If reach is the objective, or even short term sentiment analysis (and there are some stats and anecdotal clips from customers in the video I’ve linked to), then again, job done. But think about what actually happened here. KFC franchisees (the true customers in this business model) were left with nothing to sell. And as far as the public is concerned, a cheeky ad and it’s all forgotten about. That hardly inspires confidence in their business. I’d want to know what happened, how it happened and what they’re doing to compensate me. KFC did, in fact, do all of the above. The ‘sweary ad’ was by no means the full extent of their crisis management response. The risk by hailing this as ‘genius’ or ‘KFC shows how to handle a crisis’ is that some within the profession will believe that is really all you need to do.

Finally, Greggs and a stunt they pulled in Newcastle. Long story short – big department store across the street has a stunning window display people take pictures of every Christmas. Problem is of course the Greggs logo from across the street is reflected in the window and appears the wrong way round. So everyone’s favourite national fast food outlet goes to great lengths to take down its existing sign, reverse it (but still lights it up) so that now it appears the right way up in everyone’s pictures. And those involved trumpet their amazing stats and tell you how many extra sausage rolls they sold as a direct result. Sure.

Well, let’s put it to the test. Here’s the link to Fenwick’s Window on Instagram. I challenge you to find any instance of the Gregg’s logo appearing the right way up in anyone’s picture. You’ll struggle. The hype online, the award, the ‘genius’ advertising…that’s the objective. It’s clever, for the sake of being clever. If they’d thought it through properly, they’d have realised the biggest issue is that the Greggs sign ruins everyone’s pictures. So they’d have turned it off or covered it up at night. Does anyone not know there’s a Greggs opposite Fenwicks on Northumberland Street? So what’s the point? Why do they need a bright logo in late afternoon or evening when they’re either closed or have sold most of their stock and are preparing to close? Turn it off and enjoy the goodwill that comes with that. Or – better still, do nothing and comfort yourself with the fact that if anyone really wants a picture of Fenwick’s windows without a Greggs logo in it, reversed or otherwise, they’ll simply shift position and get the clean shot they want. You’ll find about 3 or 4 instances of the reversed logo on that Instagram search. Hardly a huge problem.

PR, marketing and advertising is full of bright, creative people working hard and getting results. But being ‘clever’ for the sake of it is of minimal benefit. Awards look nice on a shelf but we should be striving for more than that. These ideas are starting points. We need to think beyond them. What else could BA do with real-time information displays? How could KFC avoid distribution problems in future? How could a local branch of Greggs use the excitement and warmth around someone else’s Christmas window display to demonstrate they empathy they have with the community?

There’s some good stuff in here and despite my cynical tone I’m pleased to work in such a rich, creative profession. But we need to do more. We should be striving to improve things for everyone. Not seeking applause. And we need a much higher threshold before we hail anything as ‘genius‘. 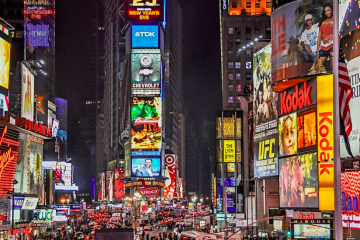 Much has been made recently of Global’s purchase of two leading ‘Out Of Home’ advertising companies, which gives the radio and entertainment giant based at 30 Leicester Square a huge market share of what we Read more…